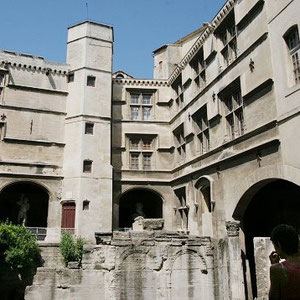 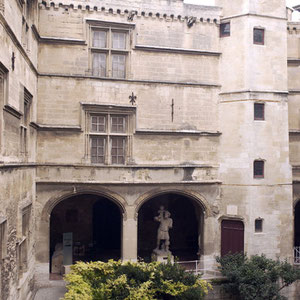 The Museon Arlatan, the local ethnographical museum, is housed in Hotel de Laval-Castellane dating from the 15th century on the Rue de la République. The museum was created in 1896 by Frederic Mistral, regionalist poet, who did much to revive and then protect Provencale language and traditions and spent his Nobel prize winnings on the project.  He created the collection to preserve a record of daily life in the area and the museum contains a huge range of exhibits from complete room reconstructions,  local painting, historical costumes, as well as local furniture, tools, objects connected with religious traditions and superstitions, all illustrating life in Provence.

Unfortunately it also has recently got some EC money and has spent it on reinventing itself into a “proper” museum with working loos and air-conditioning.  This is slightly to be regretted because in the old days it was magnificently idiosyncratic with some delightfully crazy exhibits often accompanied by completely illegible little labels sometimes written in Mistral’s own hand.  I remember fondly an egg with a deformity in the shell that had reputedly been laid under the influence of an eclipse of the sun.  You get the picture, I hope.  I have not checked whether this little gem has survived the upgrading.  It would be sad if it has not.