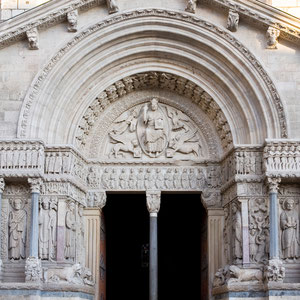 The interior of the church of St Trophime in the Place de la République is pretty dull in a gaunt Romanesque sort of way in spite of having a significant and important ecclesiastical history.  It was also the start of the southernmost of the four main pilgrimage routes through France to Santiago di Compostella in Spain, the Via Tolosana. What you cannot miss, of course, is the west facade that is adorned by one of the great Romanesque sculptural programmes in France.  Good enough to rival Vézelay, Moissac and some famous others.  And its free!

The cloister isn’t, I’m afraid, but is still worth the entrance fee - until, that is, the restorers get to work soon.  French architectural restorers since the great days of Viollet le Duc in Paris (he of Ste Chapelle, Paris restoration fame) in the nineteenth century and more recently the dreaded André Malraux, (“Minister of Culture” under the Charles de Gaulle) have maintained a particularly aggressive attitude towards the restoration of France’s ancient monuments.  Basically they want to make the place look like it has just come out of the box.  (If you ever “do” the northern French Romanesque abbey thing, be prepared) One can see this particularly with the Amphitheatre in Arles at the south west corner.  Fortunately this approach also costs a huge amount of money so unless the European Union can be persuaded to fork out equally huge amounts of money (increasingly difficult in these troubled times) the restorers will be forced to control themselves and the monuments will be saved from the ravages of total renewal.  Thus there is some hope that the wonderful column sculptures in the cloister will not be polished within an inch of their lives and restored instead with sympathy and a certain amount of restraint.    Go up onto the roof as well. 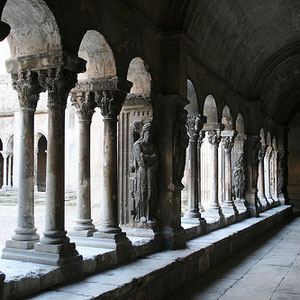 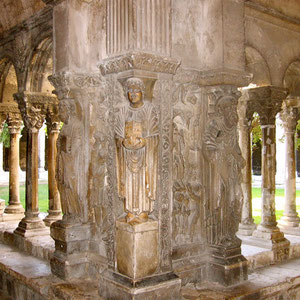