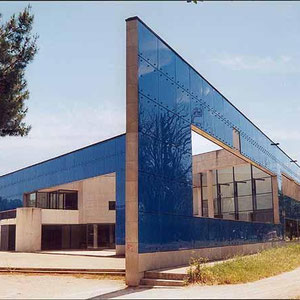 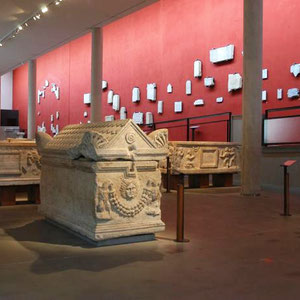 This museum, situated at the east end of the town, a good walk beyond the AutoRoute bridge across the Rhône, is an extraordinary place.  Externally, it must be the winner of the ugliest modern building in Arles.  Believe me, there is competition for that particular prize.  Inside you will find one of the best presented collections of art and archaeology you will ever see.  The tour begins with the pre-roman stuff which can be pretty boring (there is very little other than the sort of fanciful miniature reconstruction of mud huts much beloved of French museums).  If you walk quickly through all that you come across one of the most entrancing collection of Roman art.  The great jewels of the collection are the sarcophagi - the best collection outside Rome in spite of the Louvre in Paris pinching a number of seminal pieces.  But here are also mosaic floors, amphora, lead plumbing pipes, lead weights for measuring food, wine and olive oil, jewels and hair pins, tiny domestic items and funerary plaques and tombstones, excellent and honest reconstructions and models of Roman Arles, the great horseshoe-shaped circus that once sat more than 25,000 people, (at whose turn the museum is situated), the original Theatre Antique (unlike the 19th century pastiche that you will be charged money to see “in real life” on the Hauteur), and the great Arena. They reconstruct the necropoli that were the sources for many of the great sarcophagi.  They show how Tranquetaille, the suburb to the north of the river across the bridge where the Romans originally settle is consequently where most of the stuff was discovered.  It floods less that the south bank - the Romans were no fools.

This is a great museum and infinitely worth some of your holiday time.  If you are fortunate to be in Arles on the first Sunday of the month, entrance is free (in common with a number of Arles museums) and if you go in the afternoon you can see (unless things have changed recently) the glorious sight of Arlesian children whose parents can’t afford to pay the usual entrance fee running around like dervishes, shouting their heads off, occasionally climbing on the sarcophagi to have their photos taken (shoes removed, of course).  This is what art museums should be about.  Hopefully when they grow up these children won’t think of a museum as an enemy.

Additional recent notoriety has been given to the museum by the discovery of a beautiful portrait head of Julius Caesar by divers in the river Rhône.  There are debates both about its authenticity and its identification, but is a striking piece as are some of the other pieces dug up from the river bed and almost worth the visit on their own as these more recent discoveries have been given a new room to themselves.  There have recently built an extension to the museum to house an almost complete Roman barge that has been dug up fro almost two millennia of resting in the mud on the bed of the river. 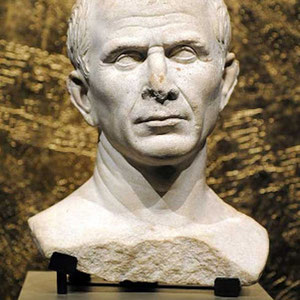 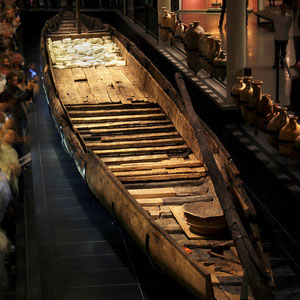